Buster’s range of small aluminium boats is being expanded with the launch of a brand-new Buster XS model. The XS is a lightweight boat that is easy to handle and can carry four persons. The recommended motor is a 15-25 horsepower Yamaha outboard.

The new XS has a length of 4.18 metres and width of 1.76 metres, so it fits in between the Buster Mini (3.88m and 104 kg, 8-10 hp outboard) and Buster S (4.43m, 260kg, 30hp outboard) in the model range. The XS is small enough not to require registration in Finland and light enough for easy handling onshore; it can be pulled behind a standard passenger car on a trailer without brakes.

Two versions of the new model are available: the Buster XS that is operated from the aft seat with a tiller and the XSr that has a console. The XS weighs 170kg and the XSr 210kg. Even when equipped with a Yamaha F20GEPL outboard, the XSr weighs just 273kg.

The previous version of the Buster XS was sold from 1999 to 2016. Compared to its predecessor, the new model is slightly wider and significantly more stable, enhancing safety especially when used by juniors and for fishing.

Like the new Buster XS, the slightly bigger Buster S is also available in two versions: one with a tiller and one with a console.

Focus on driving comfort and safety

The new Buster XS offers excellent ergonomics both when steering with the tiller and from the console. The design of the new model has also taken young boaters into consideration. The aluminium boat is unsinkable, and moving about in the boat and operating it are safe thanks to the high sides and flat floor.

“Safety is a priority when designing Buster boats. It includes predictable handling properties and general usability, both in the harbour and when operating the boat,” says Kalle Kanerva, Manager, NPD.

The console on the Buster XSr has practical storage space for small items and an electrical outlet for charging mobile devices. The design of the console allows for the use of a smartphone or tablet as a navigation device, as well as for the installation of a small sonar module or chart plotter.

An easy-to-use boat for sheltered waters 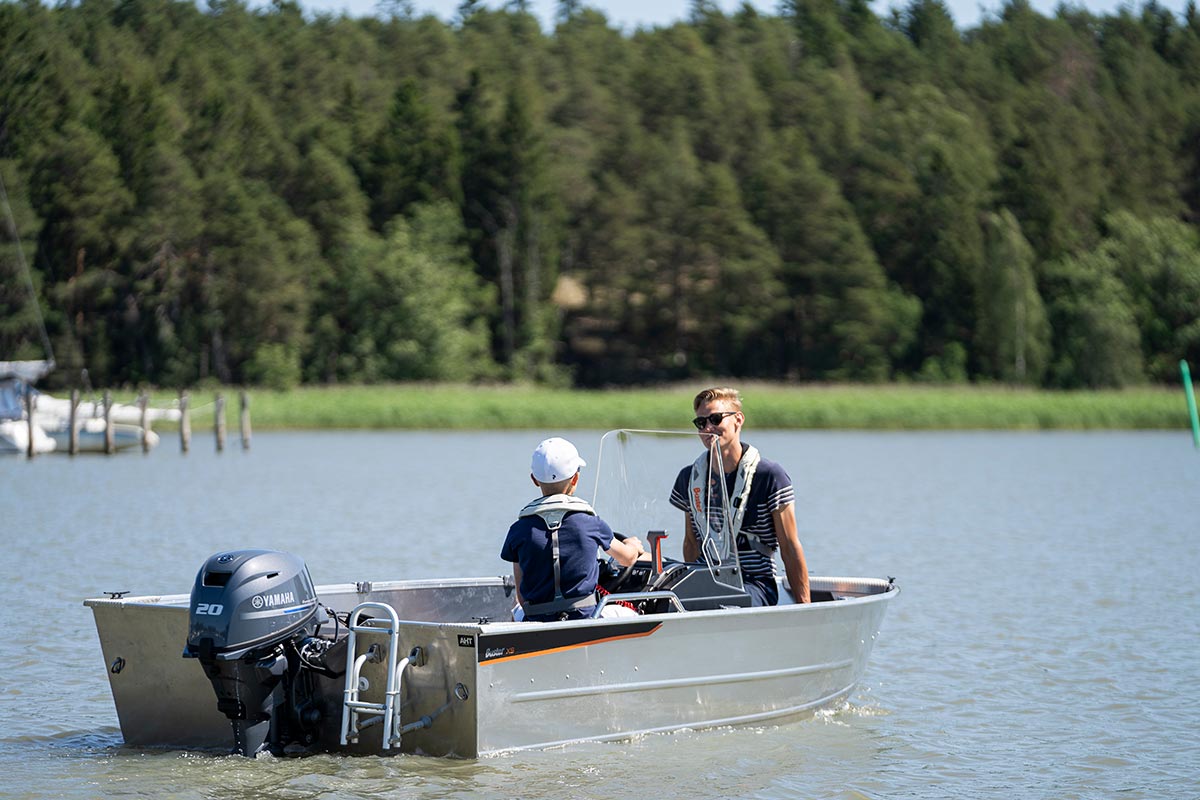 The Buster XS has design category D classification and is intended for use in sheltered waters. The XS tiller version is equipped with an easy-to-use fixed bilge pump, while the XSr console version has an automatic electric bilge pump.

The floor of the boat is completely smooth and made from wear-resistant, maintenance-free composite. Most of the stowage space is situated beneath the large bow seat, and there is also lockable stowage space beneath the aft seat.

“The large and flat bow seat makes it easy to board the boat, and it can also be used as a casting deck by anglers,” Project Manager Aleksi Juusti adds.

Buster recommends Yamaha’s new F20G outboard to power the XS. The F20G is a modern fuel-injected engine that provides plenty of torque to help the XS plane over the water. The top speed with two persons is over 20 knots. For fishing enthusiasts, the engine is available with optional Variable Trolling Speed. The Buster XS can also be used with an electric motor for more relaxed cruising.

Optional accessories on the Buster XS include cushions, bow and side railings, a removable central bench and a harbour cover.