The Buster Magnum, a true legend among large open boats, is being updated for 2022. The new Magnum and SuperMagnum models have been designed to be even more stylish and functional. Special attention has been paid to ergonomics and visibility for the skipper, as well as passenger comfort. The consoles have been completely redesigned, and the new, more vertical windscreens further improve visibility while protecting also the rear of the passenger area.

With an overall length of more than seven metres, Buster models provide the impressive and safe feel of a large boat. The design of the hull has been perfected in careful testing to provide fun, consistent and safe handling characteristics in even the toughest conditions. The Magnum and Supermagnum models are just as well suited for use as commuter boats in the outer archipelago of the Baltic Sea as they are for sporty cruising along the Atlantic coasts.

The new Buster Magnum is a 7.2-metre open boat with a seating capacity of 8 and whose maximum outboard recommendation is the Yamaha F225 V6. The Buster SuperMagnum is 20 centimetres longer with a seating capacity of 10 that can be powered by the even more powerful Yamaha F300 V6 outboard. Both models also have an impressive load capacity: 884 kilos for the Magnum and 1101 kilos for the SuperMagnum.

The modern new consoles have been designed according to the needs of today’s users, with safe storage spaces for small items, wallets and mobile devices, which can also be charged easily. The ergonomics have been thoroughly thought out, and all the controls are within easy reach of the skipper.

The material for the consoles has also upgraded from reinforced plastic to rotationally moulded polyethylene. The structure is impact resistant, quiet and extremely durable.

The focal point of the cabin on both models is the large second-generation 16" Buster Q smart display, a comprehensive infotainment system that combines electronic Navionics navigation charts, a radio, current weather information and the boat’s gauges. The handy split screen function makes it possible to view maps at two different scales at the same time, so the skipper can chart the course on one map and view details on the other.

The SuperMagnum model can also be specified with a second 10” Buster Q smart display for the other console, allowing the chart reader to navigate and control the music without distracting the skipper. All boat data and the logbook can be accessed remotely on a mobile device via the Buster App.

The infotainment system can be upgraded further with numerous other features, including a Raymarine CHIRP fishfinder, automatic identification system (AIS) and wireless remote control.

The bow section is highly adaptable for different uses. Rod boxes can be fitted to either side, allowing the bow to be used for both angling and relaxing.

Everyday usability has been further improved by redesigning the storage space under the rear sofa to make it more accessible and usable. The U-shaped rear sofa is now standard on both Magnum and SuperMagnum models.

The new windshield is now more vertical, providing better wind protection and further enhancing comfort for passengers in the rear of the boat. The new side profile also stands out clearly, even when viewed from afar.

Offshore suspension seats are available as an optional on both models: as a separate factory option on the Magnum model and as part of the Premium package on the SuperMagnum model.

Other factory-fitted accessories include an aft canvas that attaches to the windscreen with a handy zip. Separate harbour covers are available for both the bow and stern when storing the boat.

Fuel-efficient performance even at high speeds 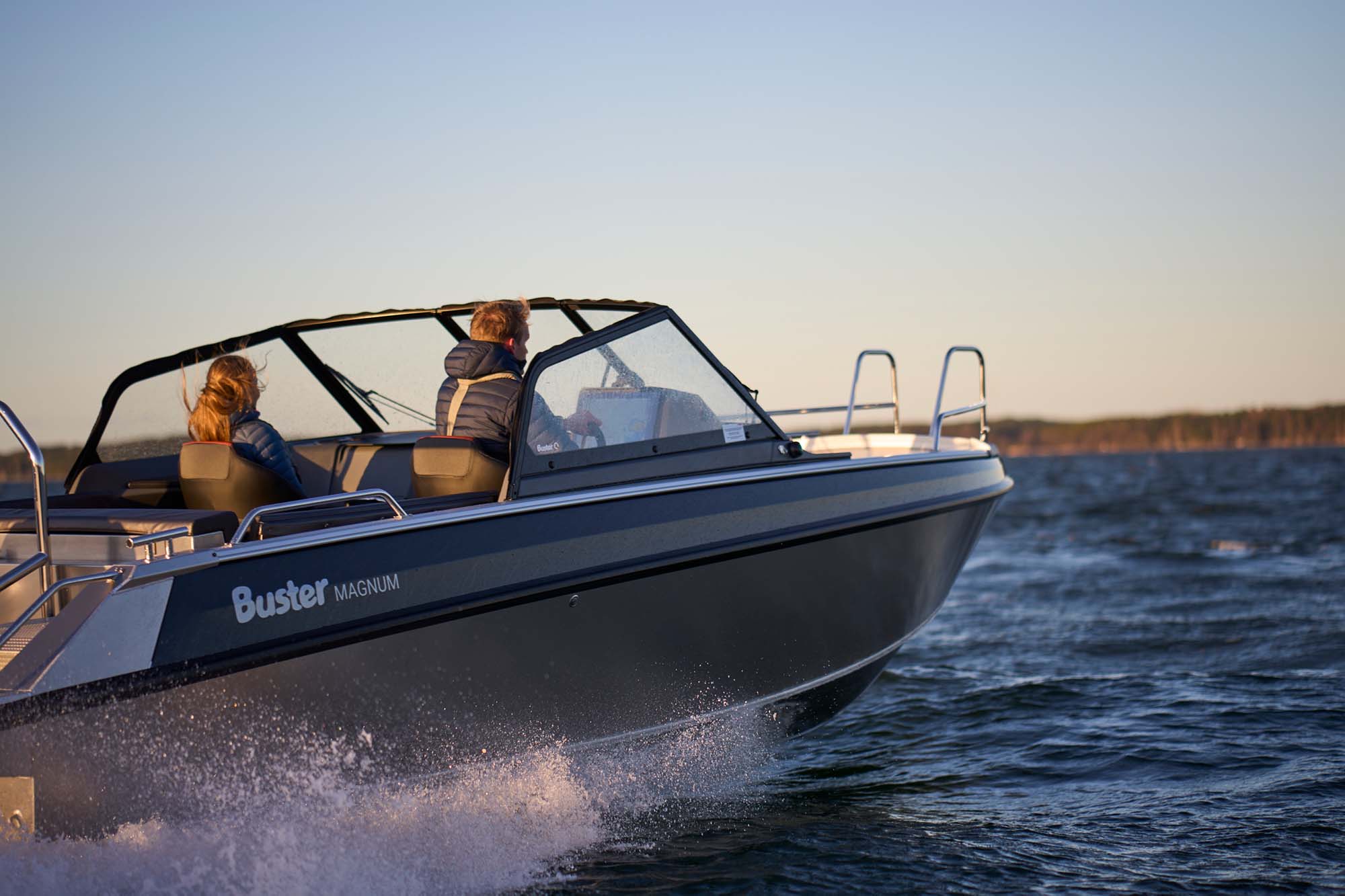 Despite their large size and high-performance hulls, both models are fuel efficient: fuel consumption is just over 1 litre per nautical mile at cruising speed and around 2 litres per nautical mile even at maximum speed. When powered by the Yamaha F225 V6 outboard, the Buster Magnum has a maximum speed of around 45 knots, while the SuperMagnum can reach over 50 knots with the Yamaha F300 V6 outboard.

Both models have a 300-litre fuel tank, enabling a range of more than 450 kilometres at cruising speed.

The hull of the new Buster SuperMagnum has been optimised for use with the latest Yamaha F300 V6 outboard featuring Digital Electronic Control (DEC) that was introduced in January. DEC was previously available only on Yamaha’s flagship XTO Offshore outboards.

The DEC system also includes Digital Electric Steering (DES), which delivers extreme precision and smoothness and offers a huge advancement in boat control compared to hydraulic steering. The steering response can be adjusted easily according to the conditions and individual preference: the number of rotations from lock to lock can be adjusted from four to nine rotations. The steering response can also adjusted automatically according to the engine speed. The automatic trim assist adjusts the outboard’s trim angle to the optimal position for the best performance and fuel economy when accelerating and cruising.

The latest engine technology has also been taken into consideration in the design of the new console, which features a dedicated place for the Yamaha Helm Master EX joystick and display in the optimal position. Helm Master EX enables precise and easy control of single-outboard boats in even the tightest spaces, such as in harbours and narrow channels. Previously, the system was available only on twin-outboard Buster Phantom models.

The standard equipment on both Magnum and SuperMagnum models includes a tilt steering wheel and trim tabs with joystick control, navigation lights and keyless ignition. The floor on both models is made from non-slip patterned aluminium, while the railings, cleats and other deck fittings are made from stainless steel.

The SuperMagnum model offers even ore standard equipment, including the Entertainment package with speakers and amplifier, as well as a waterskiing arch. Optional accessories include a refrigerator, bow thruster, anchor winch, sunbed and vinyl wrapping on the hull.

The new Buster Magnum and SuperMagnum models go on sale at the end of 2021.