The Buster S, a big favourite among small aluminium boats, gets a fourth model version for the 2023 boating season. The new Buster S2 is a multipurpose aluminium boat designed for four people and equipped with double consoles and a solid door in the middle.

"The new model version has been requested especially by boaters who use their Buster S for slightly longer distances. The double console and solid door improve comfort and protect the aft seat from rain and splashes, making longer trips even more pleasant,” says Marketing Manager Johan Finnberg.

Thanks to the carefully designed hull, the Buster S2 is stable but agile, easy to handle and quick to get up to speed. There is ample space behind the protective consoles for two adults, with room still for a child to sit between them.

The windshield is lined with stainless steel railings, which provide support when moving around in the boat and when standing behind the console. The railings also serve as a place to attach accessories.

As with all Buster models, a lot of attention has been paid to safe access – boating injuries often occur when climbing on and off the boat. The Buster S2 is easy to board thanks to the wide step in the bow and the platforms at the stern. The stepping surfaces are covered with anti-slip patterned aluminium, and the floor material is a durable, waterproof and rot-proof composite that provides a solid footing. 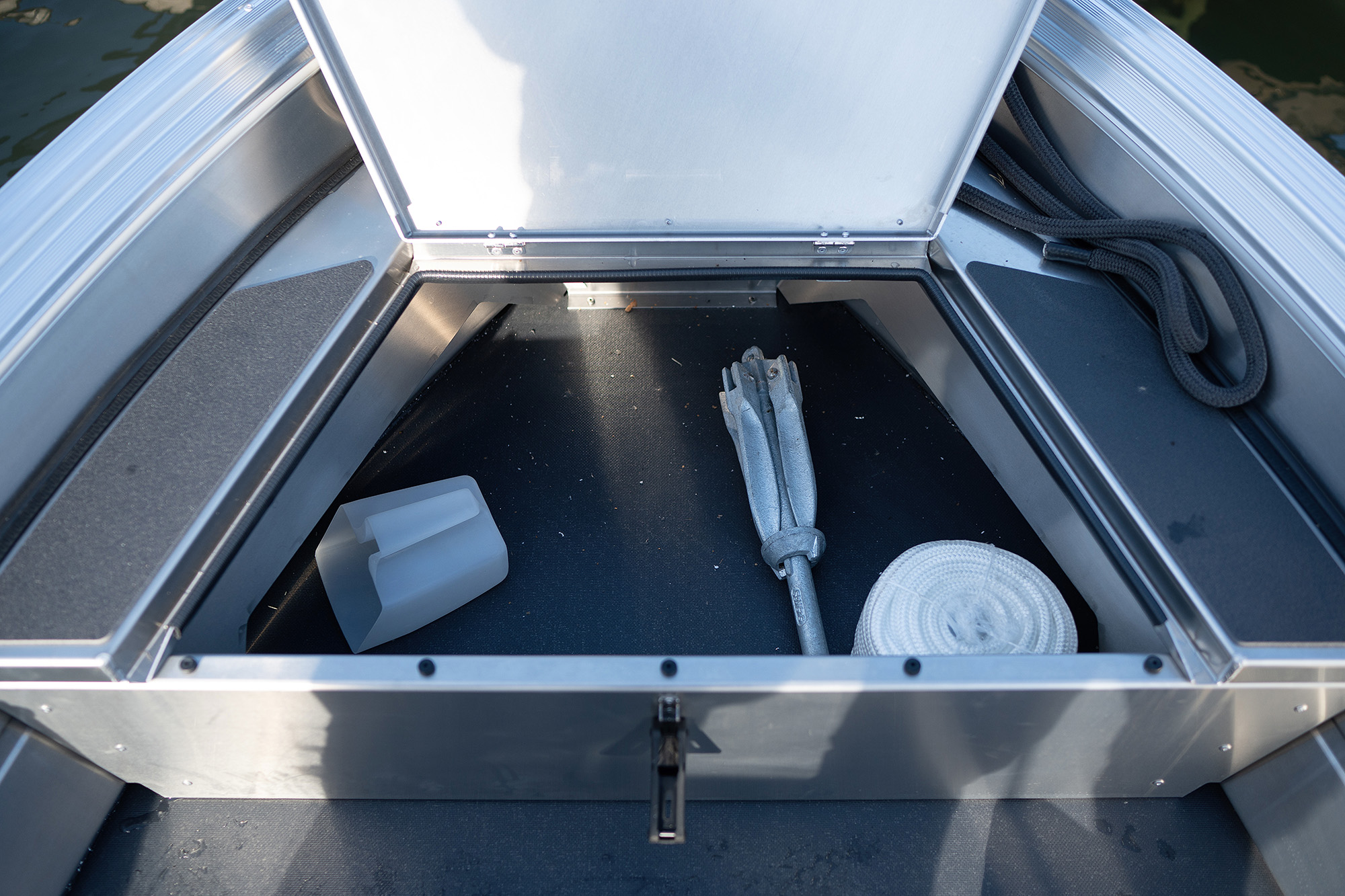 There is plenty of uncluttered storage space beneath the front seat, and additional lockable storage can be found beneath the aft seat. The navigator’s console also has a covered glovebox for storing phones and wallets, for example.

Other Buster S versions include a traditional open version Buster S driven from the aft seat, the single side console Buster S1 version, and the centre console Scc version. The open version is ideally suited for owners of summer cottages by the water and fishing enthusiasts who are looking for a simple, safe and spacious basic boat.

The Buster S can also be specified with fishing accessories, including a casting deck and bow engine mounting bracket, making a practical boat for anglers.

The side console and centre console versions offer protection for the skipper while still offering ample deck space for carrying cargo or fishing, for example. The new Buster S2 model version offers the most protection but still with plenty of uncluttered deck space in front of the consoles.

The first Buster S model was introduced already 26 years ago in the mid-1990s, but the model range was redesigned in 2017 with rainwater drainage. This makes it significantly easier to keep the boat tied up to a pier when not in use.

All four Buster S model versions share the same 4.43-metre long and 1.82-metre wide hull. The width of the hull has been used to the maximum effect in the interior, which provides lots of functional space. The load capacity of the model is no less than 430 kilos, so even larger loads can be carried without affecting performance and safety.

Light to handle on the shore or trailer

The hull of the Buster S2 weighs just 275 kilos, and the total weight with engine and propeller is 373 kilos. The low weight makes the boat easy to trailer and handle on the shore by all members of the family. The sturdy aluminium structure also makes the boat effortless to use.

The Buster S2 is optimised for use with the economical Yamaha F30 BETL outboard with electronic multi-point fuel injection. The PrimeStart system makes the engine effortless to start, and the Wide Range Power Trim & Tilt system makes it very easy to use. The engine also features Shallow Water Drive for cruising close inshore. A particularly useful feature for fishing enthusiasts is Variable Trolling RPM, which makes it easy to operate at low speeds.

Available as an optional accessory on the Buster S2 is an aft canvas top that is simple to raise and lower. The front of the canvas top can also be used as rain and sun protection with the back open.

Standard equipment includes side and aft rails, an automatic bilge pump and power outlet. Other optional accessories in addition to the aft canvas top include a cushion set, bow rail, bow engine bracket, and a bow casting deck with fishing seat. The bow of the boat can also be equipped with a convenient seat-stowage box.